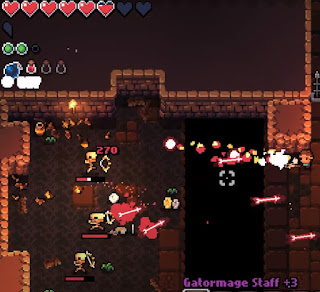 Archvale brings back memories of 16 bit console games, the game world is made up of 'rooms'  (individual screens) and you clear a screen to move onto the next screen. Possibly best described as an RPG / bullet-hell mashup, the game revolves around running around killing monsters, finding wands, swords, armor, gold and materials to craft other items. Once you are powerful enough then you can fight bosses to move onto other areas or access other upgrades and then repeat the process until you have found all the pieces of the 'arch' referenced in the game's title (I am still in the process of completing it as I write this so cannot divulge anything further).

It may all sound 'very run of the mill', 'done before' and 'more of the same' however Archvale is definitely none of these. A well-crafted, polished game that is certainly not something you are going to run through in a few hours. Very much 'breaking the mould' (or 'mold' if you prefer) in terms of the current trend towards procedural/random dungeon crawler roguelites, Archvale has a set level layout which doesn't change whilst you are playing through. Meaning, if you die, when you respawn the levels will still look the same and will not have all randomly changed into completely new (and confusing) maps.

The game itself looks, from an aesthetic perspective, very much like a game you might buy for your kids and something you would disregard yourself, cute and superficial at a quick glance. This is, however, definitely not the case and the game is surprisingly difficult with a lot more under the surface. Whilst the opening few minutes or hour may seem quite easy the difficultly level dramatically increases as you progress. If you previously scrolled past it without downloading on Game Pass or Steam thinking, 'kiddy game' then scroll back and take another look as this was my initial impression and is not a fair opinion of what is actually a challenging, fun little game.

There are a few negatives, due to the game mechanics, it can become a bit repetitive and you will often have to replay the same screens of the game over and over again to progress as every time you replenish life at a fountain all the enemies respawn. Some areas are just too difficult at first which will mean you may have to grind other areas you have played before for coins to upgrade before being able to move on. Also, other than completing the main quest, there is not an awful lot else to do which will make it a bit too linear for some players. However, all round, if you are looking for a challenge that is not too heavy on stats and storyline and that you can pickup and play for an hour or two then definitely worth trying out. Check out Archvale on the Microsoft Store and on Steam.

Popular posts from this blog

July 15, 2021
Worth watching for a smile, the Amazon 'armpit farts' back to school ad.
Post a Comment
Read more

January 24, 2021
Blogger, if you aren't aware, is a very simple, free platform that Google offers for anyone that wants to start a blog, like this one. Very easy to get started with, it allows people with little or no web design experience to start blogging, without having to hire professional help. Should you decide to use it in future (or already do), one of the features of Blogger is that it allows you use a custom domain, meaning instead of yourblogname.blogspot.com you can change your blog address to something a bit more catchy like my.shinynewblog.com or whatever you prefer. When giving this a bash yesterday, I found it to be a more complicated than I remember it being on the old Blogger platform so if you also get stuck then this is a simple guide to try and help. If you find this guide too confusing and get stuck then don't forget to consult Blogger Support where you can ask questions and search answers. To setup a custom subdomain you are going to need to be able to login to your we
Post a Comment
Read more